Born in East Anglia, Mary Gundry depicts children at play, and her work has been reproduced in the form of greetings cards, Christmas cards, limited edition prints and calendars for more than 20 years. In 2014 she published a book - "Drawn to Southwold" - devoted to her work (now sold out). Over the last few years Mary has been commissioned to paint many children, the most challenging to date was painting images of five grandchildren on the shutters of a beach hut in Southwold! 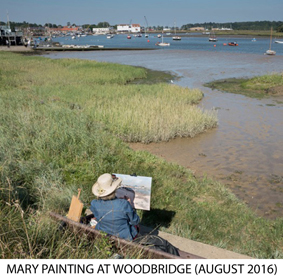 Having opened the Garden Gallery in the High Street of the fashionable family-orientated resort of Southwold in 1998, she continued to build up a successful business, selling her own work complimented by the work of 30 other artists, sculptors, potters etc. In 2005 she decided to sell her Gallery so that she could free herself to concentrate on her painting. Working from her studio in Blythburgh, Suffolk, the local area is a constant inspiration to her - the bustling High Street of Southwold, crabbers at Walberswick and Blakeney, Norwich Market, Aldeburgh Yachting pond, cafes in Holt, etc.

After three and half years working from home, she and her partner, Colin Huggins, decided to open a Gallery together in the nearby market town of Halesworth in December 2008 which they ran until the end of 2015. With more free time, Mary now enjoys painting "en plein air" in oils particularly.

This website remains the main location on the internet to view Mary's work. For any further information about any of the originals, prints or cards on this website please either call Mary on 01502 478573 or contact her using the Contact section on this website.

Mary's work features in the 2011 publication by Green Pebble entitled “How Artists See People”. In 2010 she featured in a seven page article in the East Anglian Daily Times Suffolk Magazine and similarly in the Eastern Daily Press Norfolk Magazine. Also in 2010 she was filmed for a DVD promoting Southwold which highlighted her work as a reflection of the feeling of traditional beach holidays.

"Making Waves" by Ian Collins
Mary's work features in journalist Ian's fascinating book featuring Southwold artists available in bookshops price £30.
Also in "The Artist in our Midst" and "How Artists see People....", both published by Green Pebble www.greenpebble.co.uk
Next
Previous